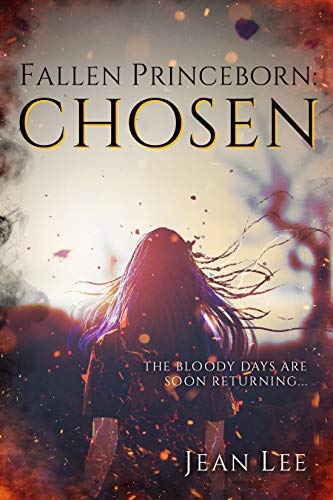 If you are like me, after reading just a few pages of Jean’s work, you will quickly realize: she’s a writer’s writer!   And it doesn’t stop there.  Weekly, Jean distributes great writing advice like some give out Halloween candy.  I’m going to let her tell you all about it.

Take it away, Jean! 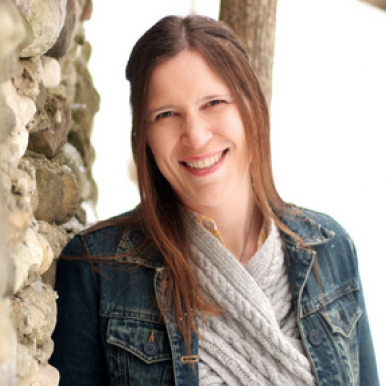 Hellooooo, you wonderful creatives and lovers of the Earth! Fantasy author Jean Lee here. Pam invited me to stop by and say hello, and so here I am to talk about turning nature’s blessings into villains. I hope you’re ready to consider and chat—I’m excited to see what you have to say!

We’re all familiar with “traditional” forms of Nature as a villain: typhoons and twisters, floods and famines.

A season such as Winter can be the antagonist of a story, or a vicious storm driving characters out of safety. Even the environment simply being itself is enough to be a force that works against a protagonist’s goals. A reading experience that has always stuck with me as a child was Gary Paulsen’s Hatchet. For all my love of magic and mayhem at that age, I was riveted by the plight of Brian alone in the wilderness. There were no werewolves there, or sorcerers, or even a jewel robber in hiding, yet the story is more than one child surviving the elements. It is a story of overcoming one’s inner darkness while learning without aid how to acquire basic needs in an environment that does not readily provide them. It’s about understanding what truly matters. It’s about believing in oneself. It’s about coming to terms with where you are as well as where you hope your life can go. 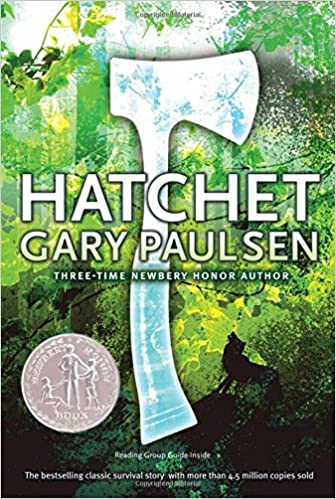 Not bad for a story about a boy marooned in the woods.

When magic is thrown into the storytelling mix, all bets are off. Wizards throw buzzards at one another, ghosts kill people in their fog, tornadoes transport people to fantastical realms, and so on. When we see Nature, a force unto Itself, controlled by someone or something else, we are SCARED because this is something we are incapable of doing. (Unless you’re Gerard Butler in Geostorm, I suppose, but that’s not exactly reality.)

Now let’s shift, just a smidge, away from weather. Let’s consider an element of Nature we don’t often consider villainous.

I love love LOVE this time of year because of the trees. The gorgeous reds, yellows, and oranges (or crimsons, ambers, and vermillions, if you’re listening to my son Biff’s lecture on tertiary colors) warm my soul like a campfire on a crisp autumn evening. I can’t help but wonder how TreeBeard from Lord of the Rings would have looked in Autumn. He is such a kindly soul in The Two Towers…that is, until he discovers Sauron’s devastation of the forest.

When TreeBeard summons the remaining Ents to war against the Orcs, we witness the strength of bark and branch against Orc forges and weapons. We root for them (ba dum CH!), Nature’s taking back of the land from Magical Industrialization.

But trees are not always allies. 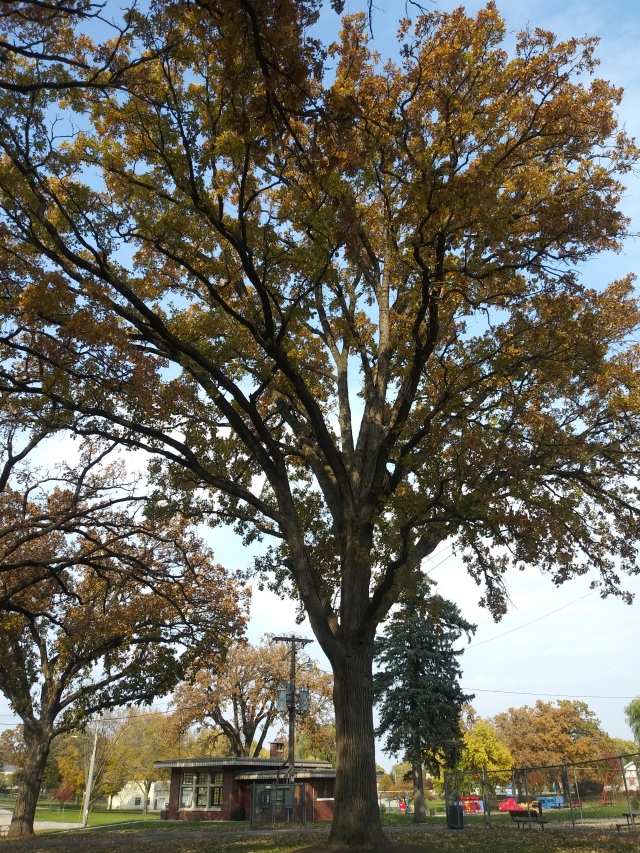 One park my children enjoy visiting is populated by a dozen oaks. They are easily three to four stories high. Their shade is a blessing in the summer months, and their falling leaves are a joy for my daughter to catch. In winter, though, their skeletal form towers and intimidates me. They became an inspiration for a line of henchmen-like characters in my new novel Fallen Princeborn: Chosen, which comes out later this month. In the first novel, the evil Orna, Lady of the Pits, refused to give up control of River Vine, a cursed land whose shapeshifters survive by feeding on human desires. The Princeborn Liam defeated her and sent her back to the Pits, but she has returned to fight Liam and Charlotte, and she’s created new abominations from her Incomplete followers.

One side of the thicket tears up like dandelions picked by a greedy child. In the Pits, Orna had melded the Incomplete with scraps from the cursed white tree.

Charlotte’s dwarfed by this Incomplete melded with a giant oak bleeding veli and oil. Its branches thrash with thorns, shredding green leaves into confetti that fall into Arlen’s eyes as he closes the distance, into Dorjan’s hair as his blue eye shines cold steel. But Charlotte can still smell the animal inside the trunk. Up near the top of the trunk she sees a humanish jaw, a rabbit’s nose. One hairless rabbit ear. Buck teeth past the chin. Fleshy paws bleeding black sinews, rooting it to the tree. A furry chest too small for its ribs—two bones ooze oil outside its skin. Its screech is neither animal nor human. It’s worse.

Intrigued? If you dig magic and mayhem with a little romance in a setting of dark fantasy, then I hope you’ll check out my Fallen Princeborn series. The first book, Stolen, is available in paperback and e-book format and free on Kindle Unlimited. 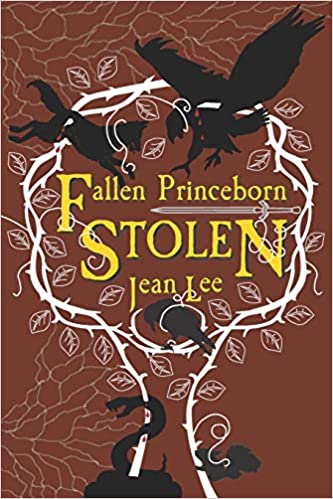 In rural Wisconsin, an old stone wall is all that separates the world of magic from the world of man—a wall that keeps the shapeshifters inside. When something gets out, people disappear. Completely.

Escaping from an abusive uncle, eighteen-year-old Charlotte runs away. She takes her bratty younger sister Anna with her, swearing to protect her. However, when their bus breaks down by a creepy old farm, the inconceivable happens—Anna is wiped from human memory.

But something inside Charlotte remembers. So she goes over the Wall in a frantic rescue attempt, accidentally awakening a once cruel but still dangerous prince, and gaining control of a powerful weapon, his magic dagger.

Charlotte’s only chance to save Anna hinges on her courage and an uneasy alliance with some of the very monsters that feed on humanity.

Welcome to River Vine, a shrouded hinterland where dark magic devours and ancient shifters feed, and where the seed of love sets root among the ashes of the dying.

Stolen is on sale before the second instalment, Chosen, hits the virtual bookshelves on October 27th! 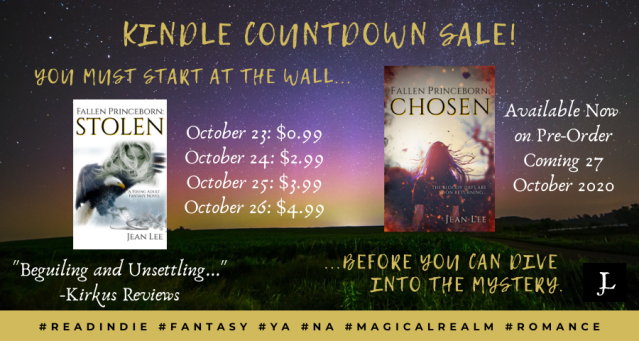 CHARLOTTE’S FAMILY MAY NO LONGER REMEMBER HER NAME,
BUT HER ENEMIES WILL NEVER FORGET.

Charlotte just wanted to start a new life with her sister Anna out of the reaches of their abusive uncle. When their journey led to Anna’s disappearance from human memory, Charlotte hunted for her sister and the mysterious creatures that took her behind an ancient Wall that hid a land of magic the world had long forgotten. Charlotte woke the Princeborn Liam Artair, and with his return the conflict between factions of the magical Velidevour turned cursed and deadly.

Now Charlotte must end this conflict before the land of River Vine and the inhabitants she’s befriended are consumed by Orna, Lady of the Pits, who is still very, very eager to see her beloved return. And Orna is not the only one who wants hold of the Princeborn Liam’s heart. These Velidevour come armed with firey wings, crimson claws, and pale fire, and like dead magic, they know no kindness.

The Bloody Days are soon returning, and they will not end until a choice is made, a choice that could tear the heart of River Vine apart.

Fallen Princeborn: Chosen is a direct continuation of Fallen Princeborn: Stolen. Recommended for fans of Neil Gaiman’s Stardust, Brigid Kemmerer’s A Curse So Dark and Lonely, and Sarah J. Maas’ A Court of Mist and Fury.

My deepest thanks to Pam for letting me share a little magic and Nature with you all. I’d love to see what you think about Nature and magic—whether you find something else in Nature to be villainous/heroic, or you consider Nature to be magical enough without the help of wizards and witches. 😊 If you dig what you see, you can check me out in various nooks and crannies of social media.

Read on, share on, and write on, my friends!