You know that lovely feeling you get when you crack the spine on a book and after a few sentences in you know you’re in the presence of a master?  That was my takeaway from reading The Night Bus, by U.K. resident, Mick Canning, a collection of stories and poems teeming with vitality and resonant with the flavor of the wide open world.  The Night Bus is Mick’s second indie-published work; the first was a novel, Making Friends with the Crocodile. 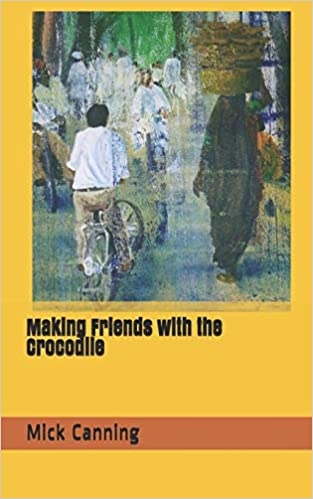 So enthralled was I with Mick’s writing that I asked him if he would stop by and chat a little.  This is what ensued.

First, congratulations on the release of The Night Bus (Nov. 2019).  It’s always exciting to release a new work, and quite cathartic, I think. How long have you been writing, Mick?  How did you first get started?

I’ve always written – I used to make up stories as a small child and read them out to my parents. I am one of those writers who ‘has to write’ – it is almost a compulsion. I always carry a notebook and scribble down ideas for new pieces or something I’m working on at the time.

From where do your ideas come?  What inspires you?  How do you keep the creative spark going?

If I knew where they came from, I’d market that! But seriously, we all have ideas. We see or think of something and think it might make a good story, but the difference is that the writer notes them down and works on some of them later. I don’t think there is anything in particular that inspires me, though. It can be as diverse as a chance thought, something in the news or a view of some mountains. As for keeping it going, when I feel a bit stuck or stale, I go for a long walk. It never fails to free whatever block I have at the time.

These have also been my experiences.  If I fail to write something down, the idea seems lost forever.  Similarly, if I get stuck, a walk dislodges all the blocks, probably because you’re giving your body something to do so your mind is free to think as it pleases.  It’s amazing how many writers have similar experiences.  From reading your stories, I assume you’ve traveled extensively.  What were some of the most profound places you’ve been to?  How does travel inform your writing?

If by profound you mean intense, then India immediately comes to mind. It is an intense country in many ways, a country of extremes and intensity. As such, it provides marvelous colour and background for stories. My novel, Making Friends with the Crocodile, is set in an Indian village, and a lot of what happens there – especially the round of day to day life – comes from my own experiences in a similar village. And then the title piece of The Night Bus is based strongly on a bus journey through Northern India and Nepal I took over thirty years ago. But places closer to home inspire me, too. I’ve set a lot of my writing in the UK (not surprisingly), and it’s possible to find the exotic even in places that might be considered more mundane since, in the end, it is often people that make places.

Have you had any of the metaphysical experiences you write about in your stories? If so, tell us about one.

They’re all out of my imagination, sadly!

What message do you most want to convey with your writing?

That would depend on the story or poem. In Making Friends with the Crocodile, I am writing very overtly about the prejudices and abuse faced by women, but in other pieces I am usually aiming to entertain rather than get a message across. That doesn’t mean I don’t throw in a few pointers or make a few points, of course. As someone with strong opinions about many subjects, I think that’s inevitable.

Do you go for a clear message or do you want the reader to extrapolate?

That rather depends – see above!

Do you work outside of writing, i.e., do you have day job?

What has been your greatest writing lesson?  How about life lesson?

As far as writing is concerned, there is no substitute for writing as much and as often as possible. That is how you develop your style. To read as much and as widely as possible. That is how you learn so much about structuring. And finally to actually learn and know how to use grammar. That is how you stop your books sounding lazy and amateurish. And then a serious edit. I have read many, many samples of self-published books on Amazon, and I am amazed and appalled at how incredibly sloppy and poor some of them are. It is scary enough putting yourself out in the world to be read and judged by strangers, so why make yourself look extra foolish? And make someone who has bought your book feel short-changed and resentful?

A life lesson? Live in the present. It’s all we have.

Who are your biggest influences?  Inspirations?  Present day? Historical?

The writers who have had the greatest influence on me are possibly the South American short story writer Jorge Luis Borges and the novelist Hermann Hesse, but I suspect that everything I’ve read has had some sort of influence, and it’s more than likely that I don’t recognize some of them. Perhaps readers might be more likely to spot them.

Now that you mention Borges, I can see his influence on your work.  He’s a very trippy (metaphysical) writer in my opinion.  As far as you own work, where do you want to be ten years from now as far as creative accomplishments?

It would be nice to sell a few more books…

I know from reading your blog that you have a deep respect for nature and the environment.  What can we do as writers to help nature out or at least educate our fellows in this critical time?

The obvious, really. Use whichever platforms we have to educate and inform. My blog reaches more readers than my books, and on a regular basis, so that is where I write on environmental issues. That’s not to say I won’t perhaps explore those other avenues sometime.

Anything else you want to add?

Thanks for inviting me here, Pam.

My pleaseure, Mick.  I look forward to your future works.

Making Friends with the Crocodile:

Siddiqa was only just into her teens when she was forced to leave her home to live with her new husband and his family in another village. The years have passed, and now Siddiqa has three children of her own. Her grown up son has brought his new wife, Naira, to live with them, so Siddiqa is no longer the lowliest in the household, for she has a daughter-in-law.

Life in rural India is particularly harsh for women. This novel explores themes of female oppression and tradition and asks whether the next generation will find life any easier.

This book is in two parts. A collection of seven short – and not so short – stories, which make up the bulk of the book, followed by a selection of recent poems.
Travel has always been a passion of mine and, one way or another, nearly every piece here is to do with journeys. Some of the stories are quite dark, but the majority of the poems have a lighter touch.

Two stories are set in India; in one, a young man goes in search of a mysterious destiny, while in the other a traveling Englishman becomes embroiled in a chilling disappearance. One story speaks of the support and comradeship of a close-knit island community while another tells of jealous intelligences far older than mankind.

There is one long poem, which gives the title to this collection and tells of a journey across India and into the mountains. There is also a short series of poems about the ancient paths and tracks of Britain; in these, especially, a love of the natural world shines through.

Mick can be reached at:

19 Responses to The Night Bus