A few weeks ago, I found this copy of Philadelphia Magazine in the lunch room at work, left, thankfully, by a fellow magazine recycler who’d obviously enjoyed the issue and wanted to share — a nice guy (or gal). The cover not only caught my attention, but echoed something I’ve been fretting over years. 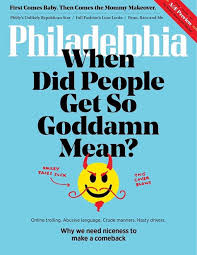 I didn’t grow up in Philadelphia, but I lived there for a decade and I’ve worked there for almost three, and let me tell you, monikers cannot only be deceiving, but downright wrong.  The City of Brotherly Love, as Philly is known, is a rough and tumble place when it comes to manners, unless by brotherly they mean frat brothers who’ve been out on a three-day bender. It’s been over 20 years since I’ve lived in the Philadelphia, but even then I bemoaned the general lack of politeness.  I’ve always maintained that it’s our civility that has allowed us to evolve as a species.  Take away tolerance and what do you have? A bunch of people who want to beat the crap out of each other when they don’t like what the other guy:  looks like; is wearing; is eating; is doing; has to say; the list goes on. 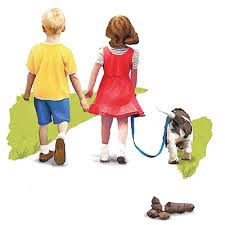 I guess the editors at Philadelphia Magazine felt it was time to address the City of Bad Manners in a tone everyone could understand. You can find that article here.  Do read it as it’s a delight.

I think that this is not just good for Philly, but great news for the world at large and perfect for this month’s We Are the World Blogfest, #WATWB.  Niceness makes a comeback.  And why not?

Isn’t it time for niceness to be front and center again? What if Congress and the Senate injected a bit of niceness into every one of their sessions and said things like, “Hey, want to get a beer after work and talk about this immigration issue?” or “How can we best reduce the deficit without taking away some very important social programs that people rely upon?” to someone in the opposite political party?  What good might come out of that?  What if Christians and Muslims and Jews all decided to put differences aside and have a Coke together, perhaps talk religious theory instead of dogma and find their commonalities instead of their differences?  What if instead of responding in anger to the driver who cuts us off in traffic, we responded with a smile, a nod of the head and an intrinsic understanding that we’ve all been there, we’ve all had bad days, and life can be tough sometimes. You’ll never know what the other guy is going through unless you stop and ask, or even just listen.

Maybe today is the day we all do that.  Imagine — a world where all sorts of people from all different places with all different hair, skin, eye color, food preferences and religions, simply got along.  How nice would that be?

Welcome to 2018 and the first edition of #WATWB.  Co-hosts for this month are Shilpa Garg, Simon Falk, Lynn Hallbrooks, Eric Lahti, Damyanti Biswas and Guilie Castillo.

Want to join?  Here are the guidelines for #WATWB:

2. Link to a human news story on your blog, one that shows love, humanity, and brotherhood. Paste in an excerpt and tell us why it touched you.  Accentuate the positive!

3. No story is too big or small — as long as it Goes Beyond religion and politics — into the core of humanity.

4. Place the WE ARE THE WORLD badge or banner on your Post and your Sidebar.

5.  Spread the word on social media. Use the #WATWB hastag.  Let’s start a movement!

Just click Here to enter their link and join us!

writer, blogger, environmentally hopeful
View all posts by Pam Lazos →
This entry was posted in Uncategorized and tagged #bepolite, #WATWB, blog, blogging, City of Brotherly Love, civility, how nice, immigration, Just Be Nice, niceness comeback, Philadelphia Magazine, politeness, religious dogma, We Are The World Blogfest, When Did People Get So Mean?, writing. Bookmark the permalink.

42 Responses to Just Be Nice — #WATWB