Well, luckily for me, the holidays were filled with many things to be grateful for:  things that make your heart soar, like extended time with family and friends; things that support your physical 3D body such as clean air and water, good food drink, and a home filled with love and light; and things that support your spirit such as lively discourse, Penn State football (Go Lions!), and great books to read.  And since a great book requires a (I’ll leave the superlative for you to decide) review, here it is, my first of the New Year.  Hope you enjoy.

Much love and many blessings to all you readers and writers alike.  May the power of the written word open your minds to healthy, happy, and powerful thoughts in 2017, and concepts that expand both your perspective and your heart. 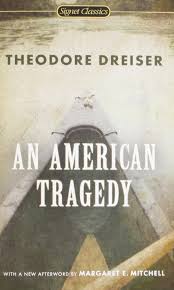 Theodore Dreiser’s, An American Tragedy, written in 1925 was extremely racy for its time, but the real tragedy of Dreiser’s novel was not the ultimate fate of the protagonist, Clyde Griffiths, as much as the societal conditions that precipitated it. Also, that I guessed the ending so far in the beginning of the book that, at times I had a hard time sticking with it. Dreiser’s prowess as a writer is overshadowed by his accomplishment as a sociologist and philosopher and in the fearless manner in which he shines a light on the American condition, one that elevated the rich and denigrated the poor of the 1920’s, a condition still in existence today. The American Dream, hard work equals becoming rich if you live in America, is simply not true, at least not for the masses, and Dreiser brilliance is in painting that picture of poverty and often hopelessness, of an American system that leaves its working class behind without choice or money or a pathway to an improved condition. Oh how the entitled look down their noses of those without money, how they chafe and groan about the burdens put upon them to uphold “society,” and oh, how Clyde longs to be part of that society. Yet the truly entitled are not those who have earned their money themselves, but have been handed it by their fathers who worked hard to ensure their own legacy which is then passed down to their children.

An American Tragedy introduces us to everyman Clyde Griffiths, born to unordained, self-proclaimed, missionary parents who run a small home for wayward souls and spend some time each day, singing church hymns and proclaiming the glory of the Lord on street corners along with organ accompaniment. Unfortunately for Clyde, this lifestyle leaves him awash in embarrassment, desperate to break free from the daily horror and the impoverished conditions that permeate his home life. Clyde desires nice things with his whole being, dreaming of one day living the life of luxury. He lacks a formal education as a result of all his parents moving around, but soon lands a series of jobs which allow him to buy the things he’s so greatly desired, but he’s terrible with money, without the concept of saving for the future or creating a safety net because no one ever taught him how so he lives from paycheck to paycheck. There’s a longstanding fallacy that Dreiser manages to shed light on, which is, if you’re poor you’re stupid and if you’re rich, you’re smart. Clyde proved himself adept at getting out of his poor circumstances, he just didn’t have the training and foresight to stay there. Clyde wasn’t stupid, simply not as schooled as his cousins and there seemed to be no way for him to catch up.

Such is the systemic nature of poverty: a lack of education and no one to advise you of how to do things differently. Clyde’s rich relations tolerated rather than uplifted him as if they thought his poorness would rub off on them. Rather than looking at the odd one or two who break free of poverty, we should, as a society, be looking at why our fixes have made the trap of poverty inescapable because the 1920’s could just as easily be 2017. Reading Dreiser, you get the impression that he believes the world needs this tragedy, actually revels in it, that the rich need the poor so they can feel richer and the poor need the rich so they can feel subjugated and that we are all just pawns in a larger script. Dreiser manages to convey all this through the guise of the twin pillars of religion and law, one created to control the masses the other to admonish when that control failed to work. Poor people may have been born poor, but they are God-fearing, and therefore malleable because of the hope of a better life after this miserable one. Easier for a rich man to pass through the eye of a needle and all. The rich, however, have little incentive to give up anything because, well, there’s just no proof of an afterlife, and aren’t material blessings at least tangible proof of God’s love?

There were a few plot deficiencies that pained me a bit, like how women, once used up, were completely dropped from the book, Hortense, Roberta, even Sondra, although again, this was the 1920’s and women had very little to do other than act in a supporting role for their men. As for the writing, at 867 pages, the book was a bit too long for me as was Dreiser’s desire to dissect Clyde’s thinking from every vantage point, but the book was written circa 1925 when a bit of verbosity was the norm, and moreover, who am I to quibble with a classic?

The character analysis, the strange and unnerving parallels to what’s happening in the U.S. today, the social implications of poverty and its reverberating effects all work to make this a great, albeit sad novel. An American Tragedy is worth your time as both a novel and historical text. Depending on how the next four years go, An American Tragedy could be more relevant today than when it was when first written. Read it. You’ll have a greater perspective regarding the challenges surrounding the nature of poverty by the time you’re finished.

6 Responses to An American Tragedy