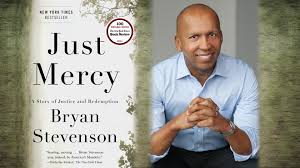 Bryan Stevenson reminds me of Percy Jackson, the boy in those Rick Riordan novels, walking through life trying to fit in like a normal kid, but sensing something’s up, then discovering he’s the offspring of Poseidon and learning superhuman tricks that mere mortals don’t have the strength (or resolve, tenacity, or sense of self?) to accomplish.  Am I in awe of this guy?  Yes sir and yes, ma’am, I am.  Could I ever do what he does?  Not in a million years, but I do so appreciate the effort and understand the sacrifices it took to make that effort.  Just Mercy — once named of Time Magazine’s 10 Best Books of Nonfiction (2014) — chronicles that effort.

In 1983, Stevenson was attending Harvard Law School and doing a brief one-month stint as an intern with the Southern Prisoners Defense Committee (SPDC) in downtown Atlanta, Georgia, a non-profit that assisted prisoners on death row.  It was then he met Steve Bright, his first mentor, an enthusiastic, mid-thirties trial lawyer and former Public Defender who had taken over the operation of SPDC and who told Stevenson “capital punishment means ‘them without the capital get the punishment.”  The office ran on a shoestring budget and there were never enough lawyers for all the man-hours needed; they considered themselves lucky if they maintained enough supplies.   Stevenson did his first interview with a condemned man while at SPDC and the nervousness he felt over his lack of experience accompanied him on the interview.  Turns out it went so well that it set Stevenson’s lifelong career goals in motion.

Today, Stevenson teaches law at New York University, is the founder and executive director of the Equal Justice Initiative (EJI) in Montgomery, Alabama, and has received 29 honorary doctoral degrees and won beaucoup awards for his work.  At EJI, lawyers represent the underrepresented, generally poor, usually of color, often wrongly condemned.  In the beginning, it was just Stevenson and another attorney.  Today, there are 50 lawyers working tirelessly (okay, they’re pretty tired, but they just keep on working) to see that justice is served for those who would otherwise have little access to it. 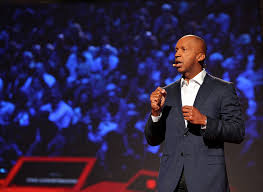 Just Mercy weaves through Stevenson’s early career while detailing his relationship with Walter McMillian, a man wrongly convicted of murder, beginning with their first meeting while Walter was on death row.  Despite underwhelming evidence, an abbreviated trial, three witnesses whose credibility was strained, and not much of a defense, Walter was convicted and sentenced to death.  Once on Alabama’s death row, it was near impossible to extricate him.  Through Stevenson’s advocacy, Walter was eventually set free, but not before serving years six years for a crime he didn’t commit.  Walter’s story, and the dozens of others Stevenson recounts in this book shine a light on the problems with our current penal system and the lengths Stevenson went to ensure justice was served.

Just Mercy is not just Stevenson’s story about representing the condemned, but an exposé on the poor, disenfranchised, mostly non-white members of society who historically and presently have and are being judged by a different standard, one that includes no breaks because of heritage or parentage or caste.  If you’re black — even if you’re a business owner as Walter was — you already have a hurdle of legal standards that will be higher than your white counterparts and the tenet of innocent until proven guilty does not routinely apply.

If you want a memoir that leaves a lasting impression, gives you a glimpse into what needs fixing, and will immerse you in a story that reads like a crime thriller, then read Just Mercy.

Happy July 4th, America!  Let us not now or ever forget the final words of our pledge of allegiance — “with liberty and justice for all.”