[All photos by Ian Eberly]

If you read my post, The Twelve Virtues of the Merchant Priest, from the book  Sacred Commerce, A Blueprint for a New Humanity, (reviewed) by authors Ayman Sawaf and Rowan Gabrielle, then you know that based upon their recommendation, I’m taking a different virtue every month and writing about it.  The 12 virtues are honor, loyalty, nobility, virtue, grace, trust, courage, courtesy, gallantry, authority, service, and humility, and Sawaf and Gabrielle believe that focusing on them through the merchant priests’ lens of beauty, truth and goodness will “automatically lift us to a higher octave of being.”

February’s entry is loyalty, which, on February 1st I thought would be a breeze since I consider myself a loyal daughter, wife and mother, and can’t imagine life without this trait. But then I started considering all the ways loyalty can trip us up, usurping ethics, morals, and righteousness just by its name. Loyalty to gangs, to a political party, to a clan or ethnicity all have a dark underbelly. In many instances, loyalty is not enough. You must also pledge your mind and body, give up independence and free-thinking, and become part of the tribe which to my mind is anathema to evolution and the goodness inherent in loyalty. So rather than write about loyalty between humans which often has gravy stains on its shirt and lipstick on its collar, I thought it best to stick with the gold star of loyalty, one that has rarely failed us in the thousands (from 16,000 to 32,000) of years we’ve been aligned — the loyalty of one’s dog.

Loyalty lies at my feet and waits. When I get up, he gets up, close on my heels, no agenda other than to standby. When I go to my room and close the door, he bursts through half a minute later, and sits on the floor next to the window, watching for deer or fox or other woodland creatures outside, but also very clearly watching me. When I go take a shower he moves to sit outside the bathroom door and wait until I emerge.

Loyalty loves his walks. When we meet the neighbor’s 3-year old, a tiny waif of a girl who squeals when she sees Loyalty, he responds with an excited tail and a lick of the hand. He sits while she pets him and he knows when the interview is over.

Loyalty’s got the run of the house and the yard. We took the dog cage down soon after we got him three and a half years ago. Loyalty’s favorite place to walk is the farm behind us where we take him to hike the perimeter without a leash. He runs full-out putting the after-burners on when he’s really happy, more exercise than a leash wold allow. Watching Loyalty run is like listening to Mozart — pure perfection. He chases birds and plays the role of sleuth, his nose mapping the way. Loyalty always keeps me in his sight, and all it takes is a whistle (or sometimes five) to bring him close. 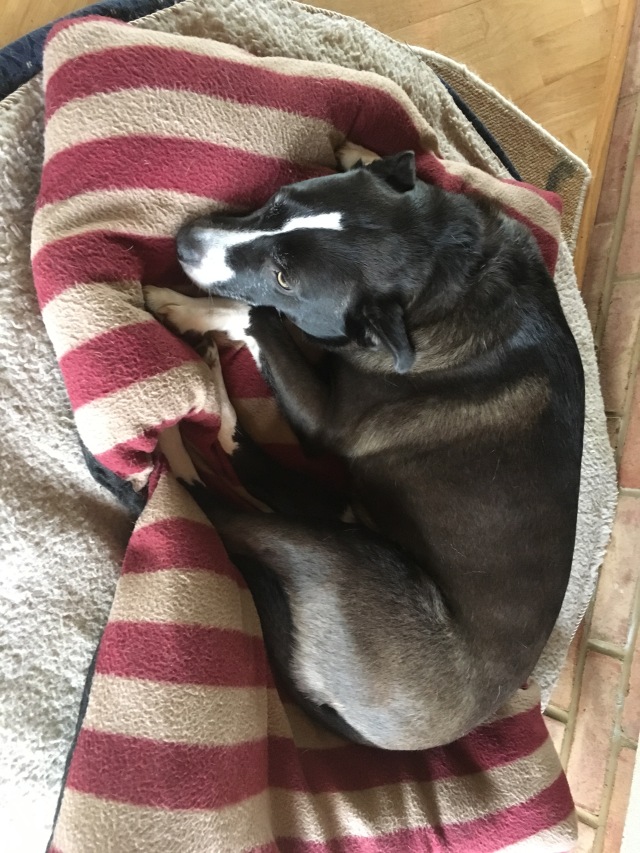 Loyalty has two beds, but he’s not allowed on ours. The cats are though, and that chaps him. Loyalty doesn’t understand why the cats get the special treatment and that’s why he chases them. My son, who is Loyalty’s real master, let’s him sleep with him in his bed when he’s home from college. This makes Loyalty very happy and sometimes he runs off to bed before my son because he knows it’s soon time. Although it doesn’t alway seem like it, Loyalty really does know how to share. When the cat takes Loyalty’s bed, he doesn’t get upset, just looks at the cat for a minute as if he both understands and wants to chase him, then moves to the other bed. (Later, when the cat is not sleeping, he will chase him up a tree or under a bed, anywhere really, just to remind him who’s boss.)

Loyalty loves his biscuits. He stands in front of the box and licks his lips. He also loves his marrow bones, the ones I buy from the grocery store and bake in the toaster oven. When I say the word bone, Loyalty runs to the freezer and twirls in circles. Loyalty is very smart.

When one of us comes home from work, or college, or even the grocery store, Loyalty alerts the media. Then, depending on how long that person has been gone, Loyalty alternates between standing near your open car door, tail wagging fervently so you can pet him, and doing laps around the yard to burn off his excess exuberance. When my son comes home after being away at school for a month or so, Loyalty could carry on like that for ten minutes, lap after lap after lap, joy in motion.

Loyalty runs off into the woods at night before bed when we let him out to sniff and pee on trees. He might chase a rabbit or a leaf, and one time he chased a raccoon up a tree just like he does with the cats. When I whistle for him he always comes home. 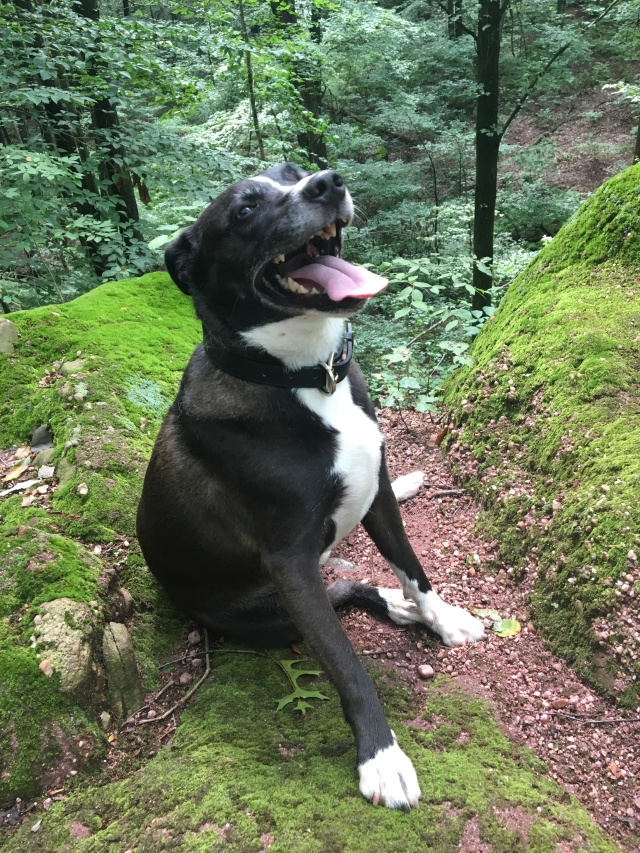 I detest bullying and yelled at Loyalty the other day — something I don’t usually do — for bullying one of the cats. He sank down in an act of contrition, his tail wagging the teeniest hopeful bit, his chin bolted to the floor, his eyes raised to mine. I was so angry — he’s a jealous guy and can be really mean to our felines who predate him as occupants here. He makes Raul, the little guy, very anxious, but Bella, a/k/a Mrs. Waddles because of her girth, just whacks him in the face when he gets too close (so that means he torments Raul and leaves Bella alone). My tirade ended almost immediately when I took in Loyalty’s demeanor. I wasn’t fooled; he’ll do it again in a heartbeat, I know, but he’s also really sorry because, well, he’s a dog and just can’t help himself. Later, Loyalty was waiting at the top of the stairs for me, his usual exuberance tamped down by guilt and a countenance that was a dictionary entry for “hang dog.” As I crested the stairs, he walked slowly to his bed, a repentant sinner. This was hours later, by the way, and I’d long let the anger go. How many people say they’re sorry and really mean it? Loyalty does. I gave him a biscuit and a good back scratching and all was well again.

Loyalty’s real name is Apollo, he is love and loyalty personified, and he’s as good a friend as I’ve ever had.