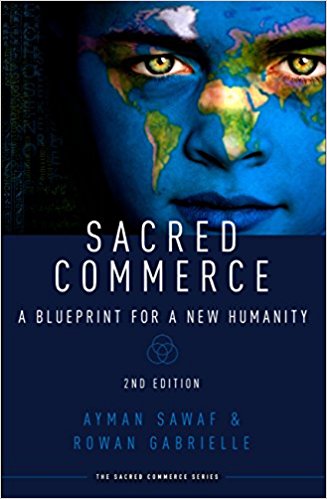 What do you call the New Age these days? If the New Age dawned in the 70’s, then it’s getting pretty long in the tooth, coming up on its semi-centennial, so wouldn’t a new designation almost be a necessity? What if what we consider New Age is actually as old as the pyramids of Egypt, older even, while the ideas contained therein have been rebranded for the modern world? Does that make it less new? Rhetorical questions, yes, but if you want some real answers about how to improve your business and life, read Sacred Commerce, a Blueprint for a New Humanity, by Ayman Sawaf and Rowan Gabrielle.

Sacred Commerce plays like an ancient melody, resurrecting and restoring the concept of conscious capitalism, bringing it to life through the quality of resonance, a trait that surely must be part of our human DNA for all our predisposition to it. It’s no secret that negativity breeds negativity, and that one person having a bad day can ruin everyone else’s (the one friend that is agonizingly grumpy all the time) be it with a dour countenance or some serious negative juju (any one of the public shootings happening with so much more frequency), but if you buy into the concept then the reverse is also true, someone with a super positive attitude can raise the energy level of everyone around them. Such was the job of the ancient merchant priests who were skilled in the art of “resonance,” the process of lifting the energy level of everyone around them by elevating their own vibrations. It’s a skill that took years, perhaps decades to perfect through meditation and conscious creation and its based on three elements of the Soul: beauty, truth and goodness.

The merchant priests drew sustenance from these concepts, meditating on them and incorporating them into their activities of daily living. By doing so, they were not only themselves elevated, but were able to elevate the entire marketplace, expanding their own energy and sending that positiveness out into the world much like a tuning fork resonates with another when its struck. In ancient times, life was base and chaotic, marked by fear and a whole range of lower emotions that lived side-by-side with people’s survival instincts, while life and death were viewed much more indiscriminately than they are today. Imagine having someone who could elevate the thoughts of everyone around them simply by holding a higher vibration. As the merchant priests focused upon the concept of beauty, for example, sitting off to the side in the open air market, their entire aura changed and they were able to spread this supercharged energy to everyone around them. This in turn brought out the principles of democracy, emotional intelligence, fairness and conscious commercialism as a means not just to sell things, but to bring out the best in the individuals affected. In this manner, every transaction becomes a brush with the Divine Feminine.

According to Sawaf and Gabrielle, our current system of capitalism, of bottom line dollars and greed above all else, is killing us and the planet. But fear not! We are on the verge of a renaissance, a return to the themes of beauty, truth and goodness, of conscious capitalism, of all for one and one for all, of the time of the merchant priest. Sacred Commerce recommends focusing on the 12 virtues of the merchant priest — honor, loyalty, nobility, virtue, grace, trust, courage, courtesy, gallantry, authority, service, and humility — to “automatically lift us to a higher octave of being.” If you want an inkling of what this new old world order will look like, read Sacred Commerce and immerse your Self and the world around you in a higher vibration.