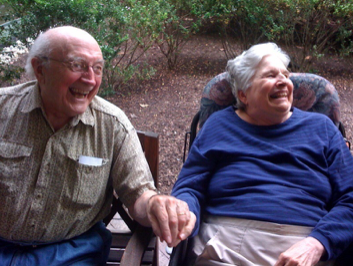 Today is Carl R. Smith, Jr.’s birthday. I never met him in person, yet I have been inspired by his writings, proffered from time to time by his son, Bill, to a select group of readers over the last couple years. From these musings, it’s apparent that Carl was a deep thinker with a large pool of spiritual ideas and experiences that bestowed upon him a profound understanding of the human condition with nary a grudge or complaint in place to accompany it. He was truly a man who loved others, as Jesus said, just as we ourselves would want to be loved. I thank Bill for sharing the gift of his father’s writings, and am offering them to all similarly situated. May the words of this wise and noble man assist you on your own journey.

“Just a Couple of Old People Holding Hands”:
A Memoir of a Marriage in Alzheimer’s World

Carl Smith and Mary Helen Lawson were married in 1981. For both, it was a mid-life, second marriage. When they fell in love, they lived alone a few blocks apart in Indianapolis, having raised and launched a total of eight children.

Carl and Mary Helen were both refugees from the State of Matrimony. MH was divorced, and, to put it mildly, was not on good terms with her ex-husband. (l will leave it at that, respecting my step-siblings’ privacy and realizing that I have a one-sided view of their parents’ marriage).  Read more here…